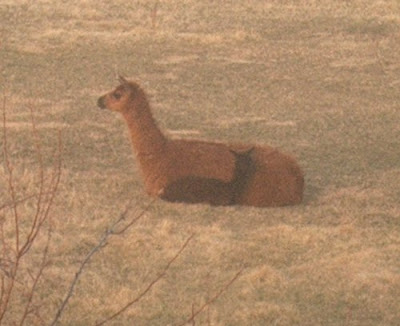 The big L is for Lyle who seen that he was actually being born and the rest for Floyd, the guy thats been helping us out with Pebbles and the cria.

The name is too funny.. and it doesn't really suit him at all... but you know it'll probally end up sticking and we'll have a alpaca named Lloyd... maybe it'll suit him when he's old like Buck...lol

Pebbles is still being a awsome mom, we're were watching them tonight and he was running around doing 360's around her and if she couldn't see him, she would call him and he would come running back...so much fun to watch.

The only down side we have is that Pebbles isn't producing as much milk as he needs... so we're supplimenting... it's been drinking a bit more than 1/4 of a cup per time... and with the weight gain she must have some milk for him. 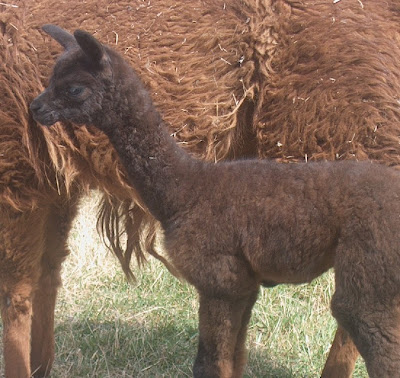 We gained an animal and today we lost one too....

This morning Naiomi came in and Koko wasn't hardly breathing... when I came back at noon to feed Lloyd he was gone.

I have done ZERO knitting the past few days, not even one st... I hope this weekend I can at least get one repeat done on Anne Evilla.

So sorry about Koko. Lloyd is really cute :)

So sorry about Koko. Lloyd is really precious. Glad mom and babe are doing well.

oh bugger about koko...sorry to hear that :(

i think lloyd is a cute name..sure it will suit him well when he is a big boy. :)

I'm sorry about your loss. Which of your animals is Koko?