sporting this yrs newest cria sweater... hot off the needles in a camo yarn. 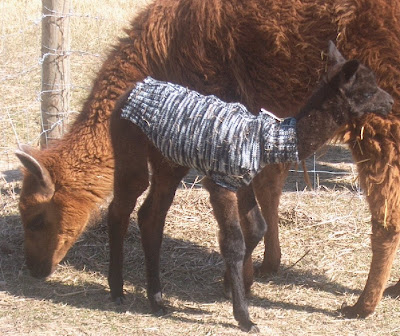 Oooooh... baby
;)
it was pretty cold today and Pebbles was stressing about staying in the barn... so I put the sweater on Lloyd and

hopefully it'll start to warm up at nights now and they won't have to spend the nights in the barn.. but for now we don't want him to get a chill..

We also think that pebbles is pretty much out of milk now... when I fed him at supper he drank just about 1/2 a cup.. thats way more than he has been ( from the bottle)

but he's doing ok and it taking the bottle pretty well

tonight I put Lloyd and the girls in the front and Lloyd just loves to run around.. he was doing circles around both of them... him legs just flying around then going way faster than he knows he can go ... then... tumble... down he goes... does a somersault and back up for another try...lol

He also loves bugging sierra... she's not to sure about this little alpaca yet and tries to ignore him... but he goes up to her and stands right in front of her where she's trying to graze... she'll put her ears back, turn and leave... and there he comes again and does the same thing.. Poor Sierra...lol... it's all way too funny.... I can't wait till Sierra has her cria and then watch the antics!!

Thanks for the baby congrats and the condolences for Koko ( he was a angora rabbit, which I forgot to mention before) as well

Oh my Gosh He is so cute. I love his coloring. He is absolutely the best dressed cria around with that knit sweater.

My MIL found the hummingbird feeder in a near by town at a shop called The Bird House. I didn't see any on their website but they do have a phone number and an email address listed if you wanted to contact them. It is a small shop so they might not have updated their website.

The feeder brand is Lone Wolf
here is the store website
http://www.cloudcroftbirdhouse.com/main.sc

I did a search and found some at this site although I could not find the same color as mine.
http://www.bestnest.com/bestnest/ceramic-hummingbird-feeders.asp

I have always used the cheep plastic red hummingbird feeders thinking the decorative ceramic ones did not work. I am so glad they do.

Have a Happy Mother's Day

Lloyd is certainly a dapper man with his sweater!

How much fun is that! So, is the sweater knit with Alpaca yarn? If so, he must feel very comfortable in it!