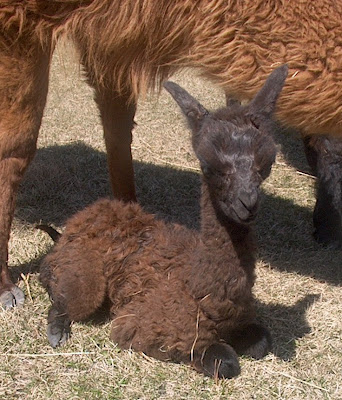 When I woke up this morning I checked Pebbles... she's been having signs of birthing for the past couple days... this morning she was humming alot, restless and didn't want to eat all of her ration... drinking lots of water and standing by the poop pile like it's her best friend... I didn't see any action for the hour I was out there so I decided I'd get ready for work... when I was washing my hair DJ came running up and said that there was something red coming from Pebbles bum.... she told me I should go check... I rinsed my hair and threw a towel over it.... went out and had a look but didn't see anything and now pebbles was up and grazing... I decided to go to work... I e-mailed my friend Stacy and told her what was going on... but I also said that I didn't think she was going to have it today... Boy did Pebbles prove me wrong... just after 11 I got a call at work... there's 2 legs out!!
I didn't make it home to see the birth, and that was the longest 5 miles EVER!!!
I found out later that Stacy phoned Lyle ( who lives right across the road from us and he's the one who noticed thing happening. and by the time he phoned her and got downstairs the baby was out... she had him super fast!!
this boy is big,....he's 21 lbs and when he stands his back touches the bottom of Pebbles belly... Summer ( last yrs baby) wasn't that tall.
Pebbles is doing AWSOME... much better than last yr... this time she's standing to let him nurse.. last yr she kicked at the baby, she doesn't let this baby out of her site... it's awsome to see! Her milk isn't in all the way yet so we've giving the baby some milk on the side....
well I guess thats all for now.. I have to get the barn ready for them tonight, it still gets kinds cold at night so they'l be in there for nights for a bit and in the pen during the days.
I'll have more pics soon.
Posted by Dandy at 7:06 PM

Oh that is so cool! It brought tears to my eyes.

Just popped over to see if you had a baby yet.

congratulations- no wonder she was miserable/ uncomfortable.

I see you're in Canada........this is a weird question but are you from Italy by any chance? I knew a girl once online that kinda fits you but we lost touch over the years :o( Just curious.........lol

Awww! What a little sweetie!!!

he is just a cute little monster! whats his name?