here's the pond this morning.... 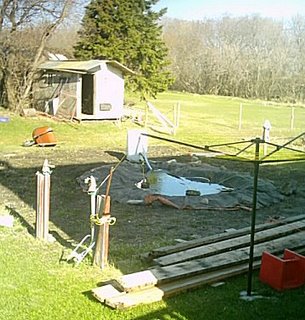 Mona wanted to help too

we moved trees after work.. they're just starting to bud out so they arn't really notacible in the pic, but you can see the big lilac right behind the filter, there's 2 little shrubs to the left and three more minature lilacs to the right, I hope they'll survive the move, it's supposed to by kind of cool the next week and rainy so that should help them. 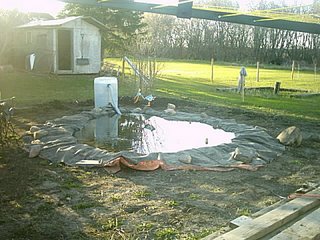 it knitting news, I have been working on the sleeves of eris again... Mom's Bday is on May 9th so I better hurry up huh?? I have 1 full sleeve to do and about 1/4 of the other one... then to block it... I should be done bu then.. but I won't hold my breath... the sweater just isn't calling " knit me, knit me"
but I also promised it I wouldn't cast on anything else until it's done... and there's DJ's cable socks yet too, and I have so many new sock yarns ( opal, sockotta, and some from knit picks) that I'm so badly wanting to cast on
whats a girl to do??
Posted by Dandy at 7:03 PM

ooooh I hope you get it done in time!!

I have to get my mothers Mother's Day socks done before Mothers day here in Aussie!! I havent given myself much time to do a pattern I have never done before (and know no one that has). I hope I get them done and well.

you have been tagged on my blog my dear