After the last cat I was supposed to get (a ragamuffin) ran away 2 days before I was supposed to pick him up, I checked kijiji and found this pretty looking boy... not only is he a good looking cat but he also catches mice birds and bats!! 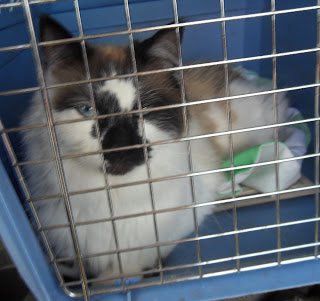 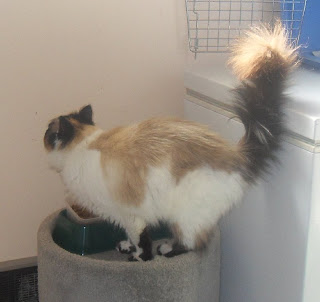 he's a 4 yr old ragdoll named Jake.
the story:
we (myself and the lady with the cat) decided to meet in the city at a mall with a walmart,
both of us got the the city at the same time and waited... each of us waiting at different malls at opposite ends of the city!! the mall I was at had no walmart so I drove the the nearest walmart... waited again... her hubby called and was talking to Naiomi, she told him we'll be right there... so we thought... we waited at that walmart for about 15 mins then decided to go back to where we were in the first place ( still the wrong place), then after another 20 mins we decided to drive to the other end of the city... meanwhile the hubby called me again to see where the heck we are... found out I had the wrong mall all along.. drove at the sound then of the city and suprise she's there with the cat just where we said we'd meet...
I hate driving in the city!!
I'm so a country girl!!
Kallie and Jake met already with a hiss and a run away from eachother... I have the rest of today and all day tomorrow to introduce them.. and then theres the dogs... that will probally be easier... they both were ok with Kallie, so I'm thinking things will be fine.
till next time...

Wow such a nice fluffy cat. are you going to spin his fur too?