Ion Foot Cleanse and some knitting

We've been hearing about this ion foot cleanse at work for quite some time now I went a couple days ago to get the papers about it and I also made an appt for my first treatment. It's only $20 for 1 treatment... so I figured if I can spend $20 on yarn I can spend it on this too...lol.. ;)
she added salt to the water and puts the plates with rods in the middle... then hooks up the electricity... yes it does tingle.. and did for about 1 hour or so after I got back to work too.
she said that you will see the water change to yellow in the first couple mins... this was after 30 seconds:
see it's turning yellow by my toes 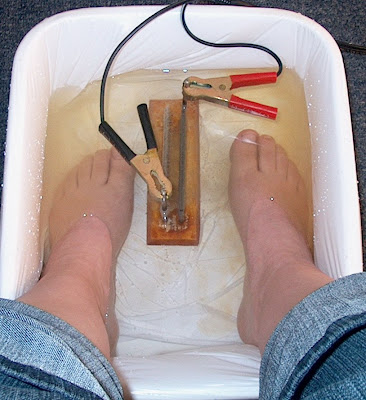 after about 5 mins scum starts forming around the plates and the water is very yellow: 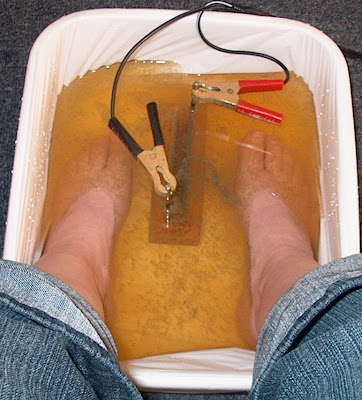 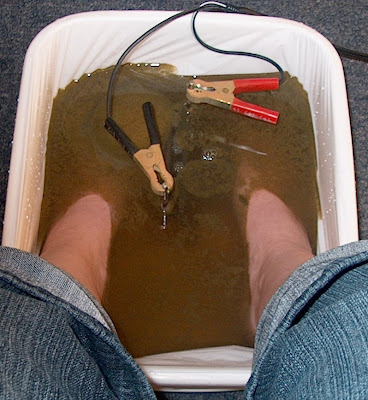 and near the end of the cleanse: 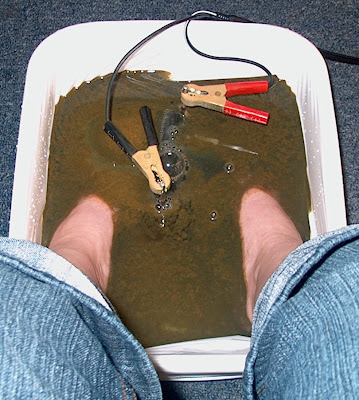 now she said that in the things we eat and in the enviroment there are positive ions and these are the bad things that we don't want in our body. The toxins.
Now we can get rid of the bad ions ourselves by placing our feet directly on the ground ( the earth is a negative charge) but ppl rarely or never walk around in bare feet ( esp in the winter) so this is another way to get rid of the toxins...
she can tell from the colors in the scum what kinds of toxins are being pulled out... in mine there were orange, which is arthritis ( in my knees) and there was a bit of white foam, which means that your fighting a cold... yep.
and after she dumped out most of the water there were black flecks in the bottom... and these flecks are hard metals... probally from iron in the water.
it's very neat and she said if you keep doing the treatments eventually the water will be just about clear.. after about 12 treatments or so... I'm going back on monday and might keep it up every 2 weeks after that.
She also said that a liver, kidney and colon cleanse would be good to do too... she's doesn't to this but you can go to a wholistic store in the city and get some shake to drink... but also don't take it if you have to work the next day until you know how your body reacts to it... VERY good to know!! ;)
in Knitting I'm just about done the cardi for Polly... I got anxious to see what it would look like with the buttons so I tied them on last night... I think I might have to make it a little short sleeve... I'm just about out of yarn for the body and I only have 1 skein left.
it's cute I think. 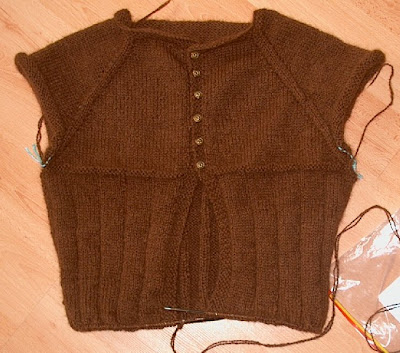 That's definitely new to me! It's kinda yucky to see everything being pulled out of your body, though.
But at least I know that when I go walking into the backyard barefoot with the dogs every day, it's doing me a bit of good. ;)
The cardi is coming out super cute! And it looks adorable even with it being short sleeves!

Thanks muchly for the comment. :)
And I forgot to ask last time!
But how did you feel physically after that ion foot cleanse?

I love the knitting you're doing for Polly too. You're such a knitting whiz! :-)

How bizarre! (Frankly, I'd be skeptical unless they used distilled water, and told me what metal the rods are... ie if the gunk is just oxidation of the metal and whatever is in the water. But then, I'm like that. ;) )