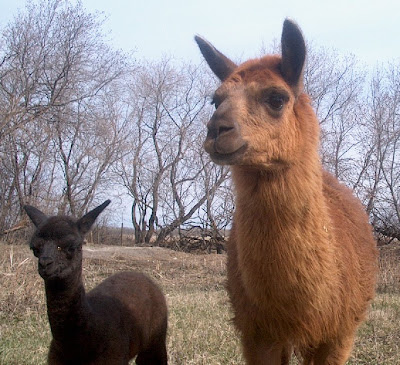 Since he's been born I've been trying to feed Lloyd the bottle and he took it pretty well at first and then much to our suprise Pebbles milk started to come in and it was such a fight to get him to take it, like 2.5 ozs a day... we just assumed that she wouldn't have any milk this time either, and fought with him at each feeding.. I called Floyd and asked him what the problem could be... he said don't feed him any from the bottle that night and he would be out sometime sunday morning.... welll there was no problem....
Pebbles has milk... but only on one side.... he figures from the last pregnancy she has mastitis on the other side. Hopefully she'll be ok to continue feeding him until he's weaned, but we'll have to keep a eye on him...
I'm still weighting him once a day and he's been gaining .5lbs a day ans it up to 25.5 lbs as of yesterday morning.

Sierra is doing good, she's getting bigger by the day and is starting to lay on her side like Pebbles was... Albert thinks she'll go early like Pebbles I think she'll weight until the end of the month, or maybe longer

My mother day was awsome... it was warm and windy outside so I did work outside, raked the dog run and fun stuff like that.
the girls got me the funniest card

Top Ten Things You'll Never Hear Mom Say
10. Because I said so... Okay, you got me. That is a pretty lame excuse.
9. Are you going out like that? How do you expect to land a man if you don't show off the goods?
8. I thought we could use some bonding time. Lets get our navels pierced.
7. Curfew, smurfew. Just be home by the time your father wakes up in the morning.
6. No, you can't have a beer. Finish that bottle of cheap wine you opened first.
5. Don't bother picking that up. I was put on this earth to be your maid.
4. No clean underwear? Can't you just go without them today?
3. As long as you're living under my roof, you can pretty much do whatever you want.
2. Take these scissors to your dad now. Run!

and the #1 reason
This is going to hurt you a lot more than it hurts me!

They also bought me a pair of jeans ( needs to be hemmed)
and a turtle pond spitter, I have a rock in the middle of my pond so thats it's new home.
so thats all for now...
Posted by Dandy at 7:47 AM

Love the pictures of the animals.